Do the Write Thing Detroit 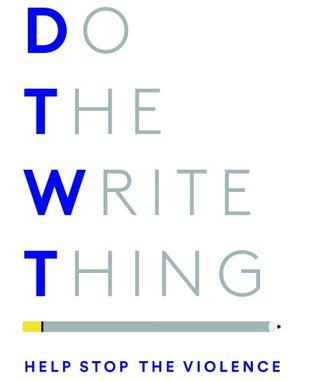 The “Do the Write Thing Challenge” Program (DtWT) is a unique education program designed to give middle school students an outlet to communicate in classroom discussions and written form how violence impacts their daily lives.

Read the study completed by the University of Texas at El Paso on the Do the Write Thing Program.

The Do the Write Thing Challenge (DtWT) is an initiative of the National Campaign to Stop Violence (NCSV). It began in 1994 in Washington, DC and is a 501(c)(3) non-profit, non-partisan, organization composed of community, business and governmental leaders who have come together to reduce youth violence in communities across the United States.

The initiative’s mission is to encourage middle school students to discuss and write about youth violence in their communities and to make personal commitments to do something about this critical issue.

Detroit was one of the originating cities in 1994. In 2000, the late Roberta Wolfe-Bryant took over the Chair’s position until approximately 2010 when it was passed to Denise A. Barnes and presently, Zemen Marrugi. Since 1996, well over 6,000 sixth through eighth grade students from metro Detroit and surrounding communities have participated in this violence prevention program. Students are required to address three specific questions regarding their personal experience with violence in any written form (essay, short story, poem, rap, etc.). These writings are then evaluated and used as research by the National office to develop best practices to eradicate youth violence.

At the school level, one boy and one girl finalist are selected from all of the writings that are submitted from that school. Each school submits their two finalists to a separate judging panel of local business leaders, politicians, judges, attorneys, etc. who select the top boy and girl based primarily upon their writing, to represent Detroit as its national student ambassadors.

They are given the opportunity and responsibility of meeting with their Senators, Congressional Representatives, as well as representatives from the Department of Education, the Department of Justice, the Supreme Court and the Library of Congress to discuss their views about youth violence. One of the hallmarks of their time in Washington occurs when their writing, which has been compiled into one national book, is placed in the Library of Congress during a special ceremony.

This year, we will host our local Student Recognition Luncheon Ceremony at the Library of Michigan along with an indoctrination of the book with the Librarian, as we do at the Library of Congress in Washington, D.C. We will bus approximately 100+ students, parents, teachers, and principals to Lansing. We are hoping to have our local representatives present the trophies and be our speakers, and invite the media for coverage.

2015 - The Robert Wolfe-Bryant Award is awarded to the late Roberta Wolfe-Bryant at the National Recognition Ceremony in Washington, D.C. and accepted by her daughter Gabrielle Bryant